Windows Server 2016 is available now in an evaluation version. It lasts for 180 days and then you'll be able to upgrade to GA, which is expected in the new few weeks. So here's how to get Docker up and running natively and run a simple IIS website in a Docker container in Windows Server. 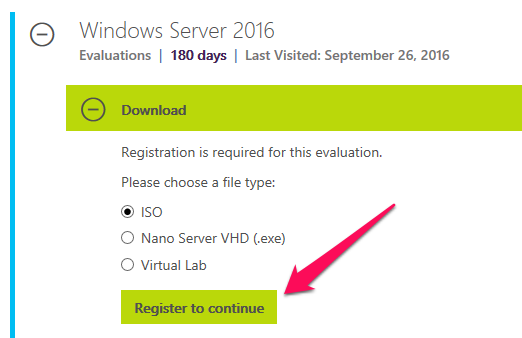 You'll need to fill in the usual details, and then the 5GB download will start.

Where we're going, we won't need server UIs. Use your preferred VM platform to create a new Virtual Machine, point it at the ISO you downloaded and start it up. When you get to the Windows Setup screen, choose one of the Server Core options: 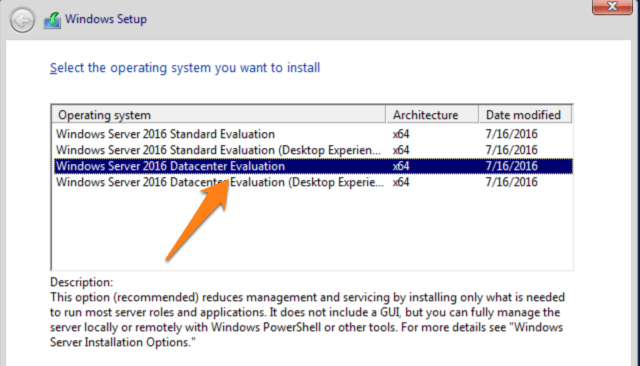 I've chosen Datacenter Evaluation, but the important thing is not to choose a "Desktop Experience" variant. They come with a UI and it's time you stopped using them with servers.

When the install finishes and the VM boots up, you'll be prompted to log in with a quaint text-based screen:

The next few steps are from Microsoft's Windows Containers on Windows Server Quickstart, but condensed and/or expanded.

There are two parts to running Docker on Windows - first you need to install the Containers Windows feature. Server Core boots into a command prompt, so you need to run powershell and then:

(You can use Ctrl-V in PowerShell to paste in the commands).

It will install the feature and then tell you to reboot, which you do with:

When it's back online, you'll have the Containers feature and now you can install the Docker Engine.

All in PowerShell, download Docker, unzip it to Program Files and add it to your path:

Note the path for the docker.zip download - this is the Commercially Supported Docker Engine. As announced at Ignite, your Windows Server 2016 licence gives you support for Docker included

Now you can install Docker as a Windows Service and start it up:

Yes, you need to do this. The Evaluation ISO may only be a day old, but there are updates available. In Server Core you manage them by running sconfig which gives you a fun text menu:

Windows will probably restart, and after that it would be a good time to checkpoint your VM.

There are two Windows Base images on the Docker Hub - microsoft/nanoserver and microsoft/windowsservercore. We'll be using an IIS image shortly, but you should start with Nano Server just to make sure all is well - it's a 250MB download, compared to 4GB for Server Core.

Check the output and if all is well, you can run an interactive container, firing up PowerShell in a Nano Server container:

Note that the command is the standard Docker run command, and the hostname for the container is a random ID, just like with Docker on Linux.

If all goes well, you're ready for the big time.

The microsoft/iis image is based off Server Core and weighs in at a healthy 4GB compressed. If you're used to running Web servers in Docker from nginx:alpine (compressd size: 17MB) that may come as a shock, but actually it's not a showstopper.

The Windows Server Core Docker image is a fully-featured Windows Server OS, with support for MSI software installations, and the range of Server roles and features. Having a Docker image for that means you can containerize pretty much any existing workload. And because of Docker's smart image layering and caching, if you have 10 apps all based off Server Core, they'll all be using the same file for their 7GB read-only base layer.

-d puts the container in the background and -p publishes the port, so you can hit port 80 and the host and Docker will route the traffic to the container.

The ping -t business is an ugly way of giving Docker something to watch. As long as the ping process runs, Docker will keep the container running in the background. The Microsoft guys are working on a neater solution, where you'll start a foreground process which Docker monitors, and the foreground process actually monitors the Windows Service, so you'll get a proper container healthcheck.

Now you can package your own Windows apps by writing a Dockerfile based from the Microsoft images, which will look something like this - for an ASP.NET app (full ASP.NET, not Core):