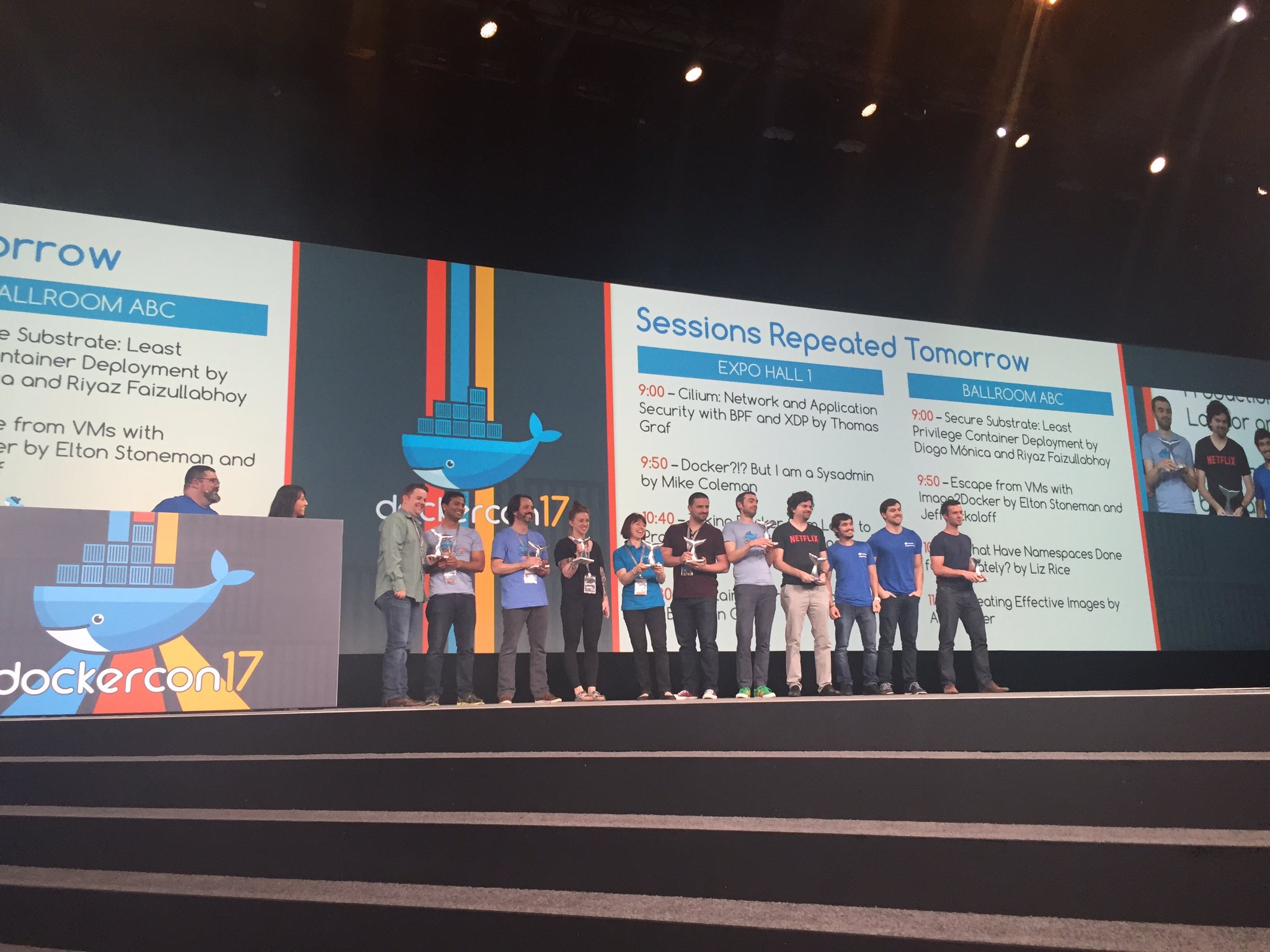 There's lots happening in the Docker world at the moment, so I'm starting a monthly retro of things I've done - videos, articles, code samples, slides etc. - so they don't get lost in the Twitter stream.

April was a busy month.

My article Modernizing .NET Apps with Docker came out. It had a technical review from newly-minted MVP Mark Heath (thanks Mark!), and it featured in the same issue as a piece from Taylor Brown at Microsoft - Bringing Docker To Windows Developers with Windows Server Containers.

I cover running a full ASP.NET app in a Docker container, and then extracting features out to run in separate containers. There's a section on how to run your Dockerized applications in Azure, and you can get the source code for the demo app.

This was Microsoft's first open-source camp, held over a full day in the Lisbon office. There were 30 sessions, 250 attendees in-person and over 1000 streaming online.

I presented a keynote session Why Containers Will Take Over the World, covering the container ecosystem and Docker as an open-source community project, as well as an enterprise software company.

I also did a breakout session The Hybrid Swarm: Running Windows and Linux Apps in one Docker Cluster. I demo an app running in multiple Docker containers on a swarm, and gradually shift workloads from the Windows node to the Linux node.

I've been a Docker user for years and I was a Docker Captain before I joined Docker, but this was my first DockerCon. It's a fantastic event - there's a huge community around Docker and they came out in force. Lots of fun, lots of new friends, and lots learnt. If you couldn't make it to Texas, DockerCon EU is in Copenhagen in October.

Assisted by Stefan Scherer, Michael Friis and Brandon Royal, I ran a workshop on the pre-day: Modernizing .NET Apps with Docker. It's a 3-hour session which covers the basics of Docker on Windows, through packaging an existing .NET app in a Docker image, to breaking out features into their own services.

The workshop is on GitHub, so you can run through it yourself: dockr.ly/dc-mta-workshop

There's a lab space at DockerCon where you can grab some VMs we provision for you, and follow along with some shorter lab sessions. Mike Coleman spearheaded the lab content, and I put together the three Windows labs. These are also on GitHub so you can walk through them:

On Day 1 I was the MC for the Using Docker track, introducing the sessions and then sitting back to enjoy them. All the sessions were great, but there were two standouts. Abby Fuller did a great session on Creating Effective Images - voted one of the top sessions of the conference:

And Michele Bustamante was fantastic with Docker for .NET Developers:

On Day 2, Jeff Nickoloff and I did a session showcasing Image2Docker - a tool for extracting applications from Virtual Machines into Dockerfiles. We take an app with a Linux part and a Windows part, run Image2Docker to pull the apps out into Docker, and then run the whole thing in a hybrid Docker swarm.

It was great fun doing this with Jeff, and we were also voted as a top session - so we got whale-tail trophies to take home.

I presented at NDC London in January (another great conference), and the video of my session has just been released.

In the session I start with an ASP.NET WebForms app running on my laptop, and then migrate it to Docker and deploy five iterations - adding features powered by Docker in each new version.

The next NDC is in Oslo in June and I'll be there - presenting on hybrid swarms, and running mixed Linux and Windows workloads in a single Docker swarm.

Getting Started with Docker Datacenter

My Pluralsight course - Getting Started with Docker Datacenter - was the free course over the week of DockerCon, and it got some great feedback - thanks everyone who reviewed it!

It's a short introduction to Docker's enterprise product suite, focusing on DDC - the setup and the features of Universal Control Plane and Docker Trusted Registry.

In May I have a few things going on - be sure to say Hi if you see me around: