Docker EE 17.06 was released (actually at the end of August), which brings support for Windows nodes to the enterprise Docker platform. You've been able to run hybrid Docker swarms, with a mixture of Linux and Windows nodes on CE for a while - and now Universal Control Plane can manage those diverse workloads.

EE 17.06 is an important release - it's the only platform which gives you full production support for Windows and Linux containers.

I was speaking quite a bit this month, but I did find time to update the SQL Server in Docker containers lab. You can follow along and learn how to package your database schema in a Docker image, and run disposable or persistent database containers on Windows.

ContainerCamp is a great event. The conference manages a very good blend of hands-on workshops, cutting edge tech talks and real-life case studies, and it's preceded by a free community evening co-hosted by Docker London.

I ran a workshop on the first day - Docker on Windows: 101 to Production, with a nice small group. 12 is a good size for a workshop, it feels more like a project team working together on a new tech: 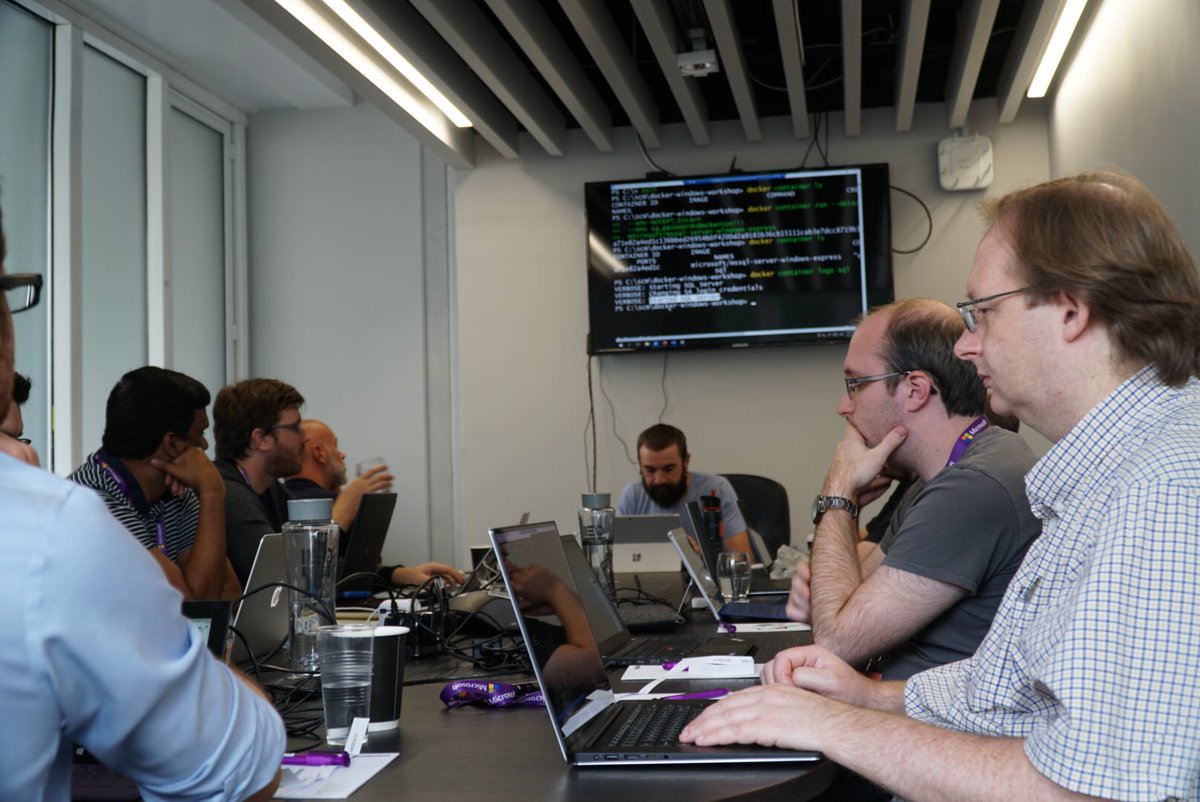 The workshop content is all on GitHub so you can try it out for yourself. Or sign up to the full-day Windows workshop at DockerCon Europe. Or feel free to run your own workshop :)

Then in the evening I was at the meetup presenting a lightning session. After a great set of presentations covering the Azure container offerings, service discovery in Kubernetes, and the design of Joyent's Triton I got up and demonstrated moving a .NET 3.5 app from Windows Server 2003 to Azure, via Docker.

WinOps is the world's only conference focused on DevOps in the Windows world. It's just the second year of the event, but it's very impressive. Jeffery Snover from Microsoft flew in for the keynote again, talking about digital transformation and how tooling helps to underpin the cultural changes.

I ran my Windows workshop, this time to a packed room of 50, and presented a container session on Day 2 aimed at the Windows world - Docker on Windows: The Beginner's Guide:

The Docker team were out in force at Microsoft Ignite. We had some great customer stories from MetLife and Fox, and many of the sessions covered Docker running in Azure and Azure Stack.

SQL Server 2017 was released too, which is available on Windows, Linux and Docker. I tweeted a picture Michael Friis took of the demo and it was picked up by one of the guys at Microsoft: 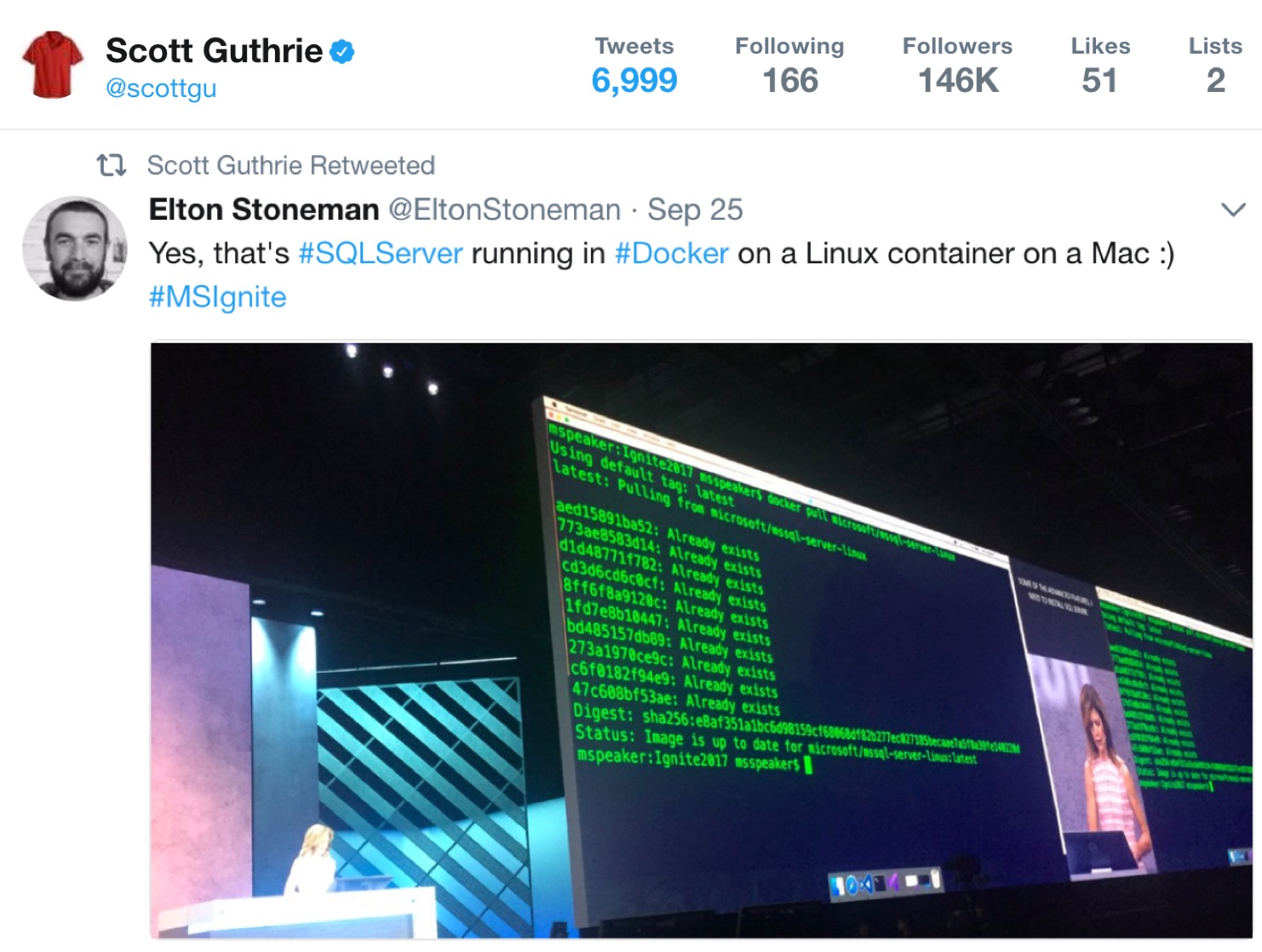 On the exhibition floor, we were super busy - hundreds of people coming by to learn more about Docker and see what containers can do for them.

I flew back from Ignite into London on Friday and got on a train to present at ContainerSched. I presented an updated version of my session Why Containers will Take Over the World:

At SkillsMatter they record all the sessions, so you can watch the video.

Given the timezone changes and the general lack of sleep, the session went pretty well. My display borked during my database container demo so I had to cut that short. But SQL Server in containers is something people are very interested in, so I'll be doing more of that soon.

At Ignite and WinOps I had some copies of my book Docker on Windows to give away (thank you Packt Publishing - more please :).

Just look at the happiness! 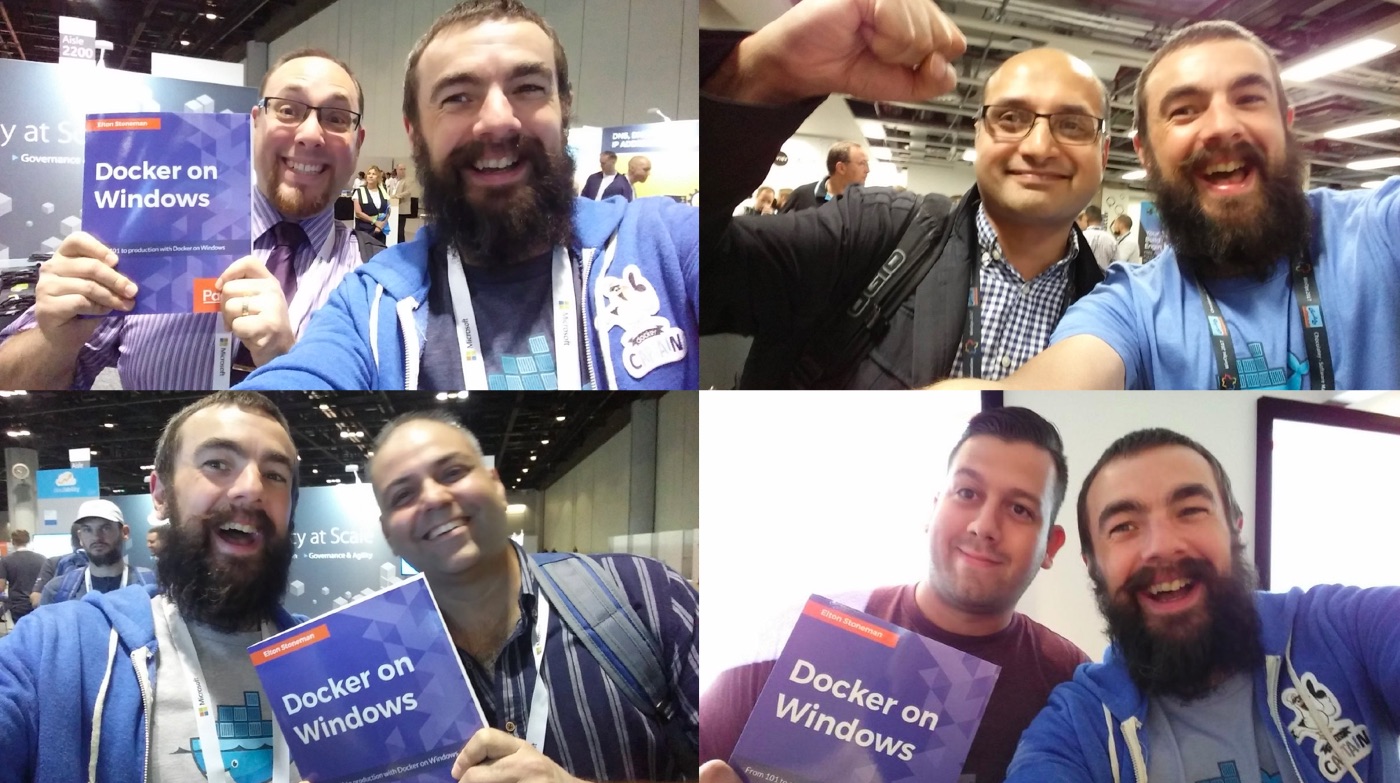 I may have a few copies to give out at DockerCon EU too...

I didn't make it to Pluralsight LIVE - which looked like a fantastic conference, because I was at Ignite. But I did make some progress on my next course, which is all about modernizing .NET apps with Docker. This will be my fifteenth Pluralsight course.

The course follows the path of modernizing a full .NET Framework web application, running it in a Windows container and using Docker to modernize the architecture, development, deployment and management of the app.

I follow a similar path that we see customers taking with their own apps in the Docker MTA program. I'm aiming to get the course finished up next month - follow @EltonStoneman on Twitter for updates.

My speaking schedule is a bit silly in October. In between I'll be trying to find time to get on with my developer-focused version of the MTA for IT Pros video series.