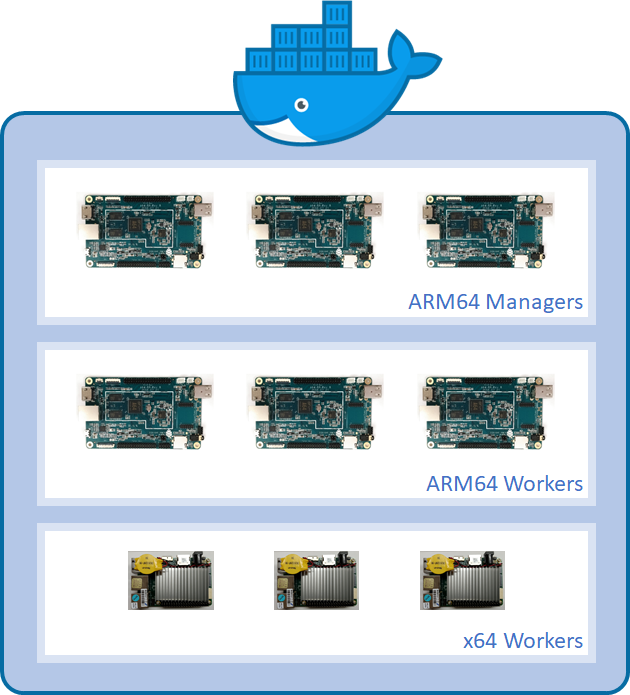 Docker Swarm is a super easy container orchestrator. It is more opionated and less configurgable than Kubernetes. There are some things Kube can do which Swarm can't, but payback for that is the simplicity, both for setup and for app management. This post follows on from Part 1 where I detailed the preparation of the hardware for my hybrid swarm:

Joining my 10 SBCs into a single highly-available Docker Swarm cluster is literally a case of running docker swarm init on one board and docker swarm join on all the others. But before doing that I want to make sure I have secure access to the Docker engine on all the nodes.

Securing your engines isn't a required step. You don't have to secure access, you can just make the Docker API available on HTTP and dispense the secure setup.

But remember that access to the Docker API on Docker CE is pretty much access-all-areas (only Docker Enterprise adds role-based access control). So it's better to spend 60 minutes making your cluster secure.

In swarm mode you'll connect the Docker CLI on your laptop to one of the swarm managers to deploy and manage your apps. Docker 18.09 added SSH access for the API which is now the simplest option. But SSH isn't the norm on Windows and I want to be consistent about how I access all my nodes, so I set up my Docker engines for secure access with mutual TLS.

For this to work, you need certificates to uniquely identify each node. For a swarm you'll be generating:

You can script up the majority of this. My notes from the sixeyed/arm-swarm TLS certificate configuration will get you started

Once you've distributed all the certificates, each server should have the following in a known path (I use /docker):

Now you need to configure the Docker engine on each node to require TLS, use the certs and accept API calls over TCP.

You can use a JSON config file to configure Docker, or you can pass all the parameters into the Docker engine service startup command. The JSON file is the better option, because it's the same format on every platform and you can put it in source control.

Here's a sample config file, specifying just the settings you need for TLS:

By convention the Docker API listens on port 2375 for unsecured HTTP access and port 2376 for secured HTTPS access.

The config file needs to be saved in:

You need to restart the Docker engine if you change config, but don't do that yet. There's a catch on Linux if you're using systemd (which you are if you run Docker on Debian or Ubuntu).

Docker doesn't cope at all well if there are conflicting configuration settings in the config file and the service startup command. The default Docker CE installation on Debian Linux will fail to start if you specify a listen address for the API in daemon.json, because there's already a listen address in the systemd configuration.

So you need to edit the systemd configuration:

Now the listen address is only specified in daemon.json, so there's no conflict. You can reload the systemd configuration and restart the Docker engine:

Docker on Windows doesn't have this problem. Just restart the Windows Service for the Docker Engine and it will pick up the new configuration from daemon.json:

Now all the engines are listening on port 2376 with mutual TLS configured. You can connect to any engine from the Docker CLI on your laptop, but you need to present a client certificate signed by the same CA as the server certificate.

You can put all the certs in the ~/.docker directory in your home folder. You'll need:

And then you configure the Docker CLI by setting environment variables for the address of the Docker API, the TLS setting and the path to the certs. I've got a script to switch to each of my nodes - in Bash it looks like:

DNS names would be better than IP addresses, but we'll come to that when we deploy a DNS server as a service on the swarm :)

Now I have secure access to every node from my laptop, so I can connect to each and setup the swarm - no need to connect to the node with SSH or PowerShell.

It really is this easy. Switch the CLI to connect to a node which is going to be a manager and run:

The SBCs only have a single network interface, so Docker doesn't need to be told the IP address for the manager to listen on. The output is the command for joining worker nodes, but first we want to make the managers highly-available. This command gets the join command for new managers:

You can switch to the two other managers and run that command - the output will be Node joined a swarm as a manager. When you have multiple managers only one is active. If there's a failure one of the other nodes will be elected as the new active manager. But you can connect to any manager to administer the swarm, whether it's the active manager or not.

Run this on any manager to get the join command for workers:

And then connect to each of the workers with your Docker CLI and run that command. The output will be Node joined a swarm as a manager.

The command is exactly the same for all the worker nodes, whether they're ARM64 Linux, x64 Linux, x64 Windows or anything else Docker runs on.

When you're done you can check the status of the swarm by connecting back to any manager and running:

That's it. A highly-available distributed compute cluster which can build and run any app on any platform (within reason).

There are a couple of rough edges yet with hard-coded IP addresses but that will get fixed in Part 3 - Name Resolution with Dnsmasq.