You can only run Docker containers natively on Windows Server 2016. Windows 10 lets you run containers with elevated isolation in Hyper-V mode, but there are some restrictions around that - and you need to be on the fast insider track to get the latest bits. That isn't a great idea on your everyday dev machine. Instead you can take advantage of the client-server nature of Docker to run containers in a headless Windows Server VM on your dev box. 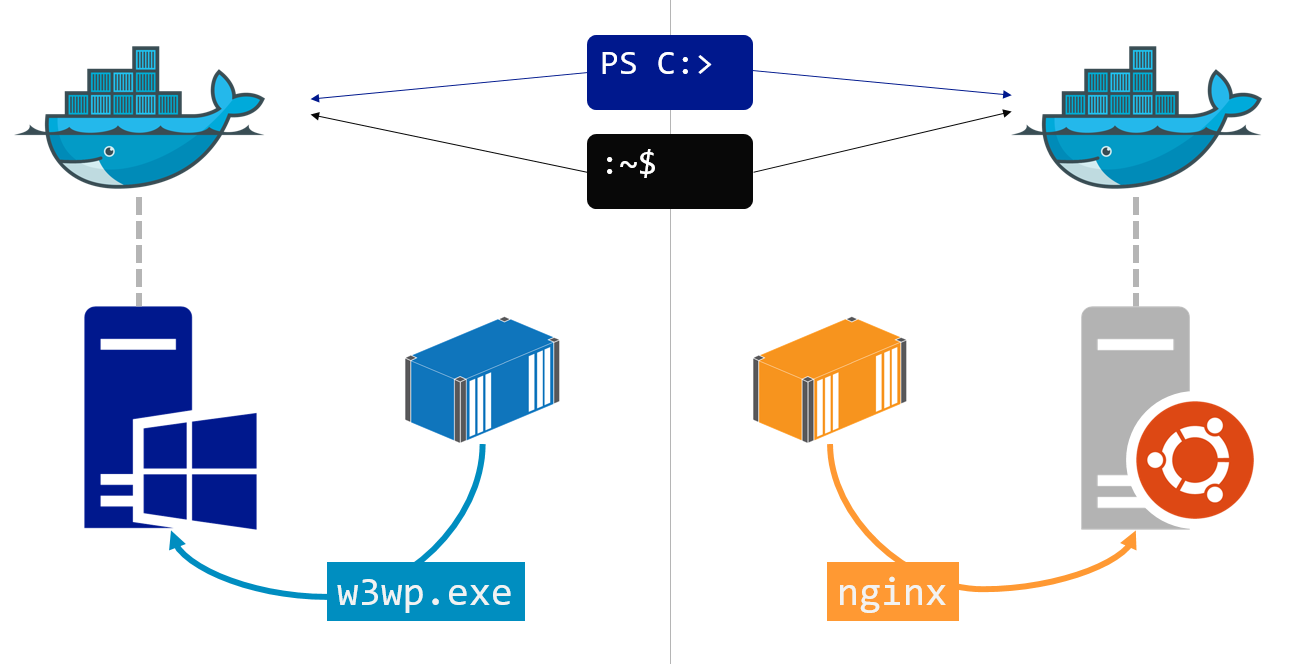 After trying many options, this is how I build my dev rigs now, and it's the most flexible and efficient way I've found. Here's how to do it.

Once you've set up the Windows Server VM you won't be connecting to it directly, you'll treat it as a headless unit which you only interact with through the Docker CLI. So the best install option is Windows Server Core - not the Desktop Experience variant, because you don't need the UI. Core gives you a lightweight VM that fills around 10GB of disk at baseline.

Start by installing Windows Server 2016. If you don't have a licence, you can use the trial edition. The VM is throwaway - all your dev tools and content will be on the host machine, the VM is only there to run Docker. The setup is mostly scripted, so you can build a new VM when the trial expires without a big investment in effort.

Don't install the VM additions for your platform on the Windows Server VM. The additional functionality is for graphics, audio, USB etc. which you don't need. Keeping them off the VM makes it more portable - so you could move from VirtualBox to VMWare to Hyper-V.

When the install completes you'll have to provide a new password for the Administrator account, and then you're left at the command line. When you log in next you'll see a basic login command prompt:

You'll need the latest Windows updates. On Windows Server Core, run sconfig from the command line to get to the config screen: 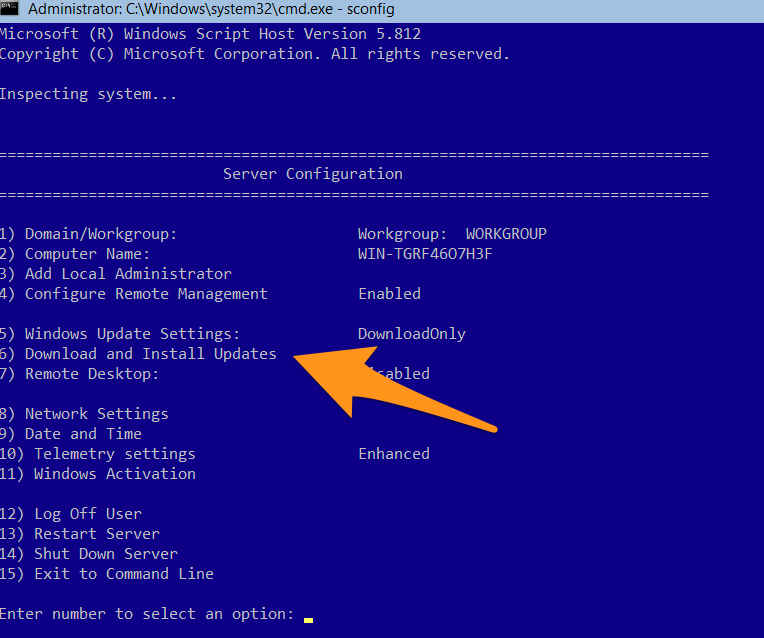 Then hit 6 for updates, A to download all updates, and A again to install all updates. This will take a while, and will probably need a restart. If your cmd skills are rusty, shutdown /r /t 0 initiates an immediate restart.

When the VM comes back up, you have a clean updated install of Windows Server 2016 and that's a good time to take a checkpoint (or snapshot), so you could create a new VM from a clean install.

Microsoft have a OneGet provider for installing Docker, and this is all scriptable. Run powershell from the command line, and then these commands to set up the OneGet provider and install the Docker module:

I use specific versions here so I know exactly what I'm installing - Docker 1.13.1 is the latest release right now. I keep an up-to-date version of the Docker install script on GitHub.

This needs a restart too. In PowerShell use the Restart-Computer cmdlet. When your VM is back you have the latest version of Docker installed, and that's a good point for another snapshot.

Pull the Base Images

Everything you run in Docker on Windows will be based from either the Windows Server Core image or the Nano Server image - both are maintained by Microsoft on Docker Hub. You'll need them, so might as well pull them now:

Now you have a basic setup ready to run containers, so another snapshot is good. At this point with the base images expanded, your disk will be around 25GB. That's a manageable size for keeping on a USB stick.

You can clone more VMs from this snapshot, but you'll need to give them a unique Docker engine ID. On a cloned machine, stop the Docker service, delete the key file and restart the service to generate a new engine ID:

Make Docker Securely Accessible from Outside

The Docker API can be exposed over TCP/IP, so on your dev box you'll access the Docker engine running in the VM over your virtual or physical network. Server Core has the firewall running by default, so you'll need to set up rules to allow any ports you'll need, or take the brute force approach of disabling the firewall in the VM:

You can set up an insecure, plaintext connection between the Docker client and the engine, but the rest of the Docker platform is secure by default, so you should secure the VM connection. To do that you need to generate server and client certificates, and configure the server to use TLS for the API.

There's no need to do that manually. Docker Captain Stefan Scherer has built a Docker image which configures your Docker engine to run securely over TLS. All you need to do is run a container from Stefan's image, passing in the details of your VM:

Stefan's image has all the logic to generate certificates and configure the Docker engine. Mapping the volumes means the container puts the files in the right place, and the client certificates are copied to the new folder on the VM.

I use two NICs in my VMs - one is host-only, so the VM can connect to the dev box on a virtual network even when the box itself is not on the network, and one which is external, using the dev box's network adapter so my VM gets an IP address from the router. Both those IPs go into the list.

Copy the Client Certificates onto the Host

The VM is all set up now, and you won't need to connect to it again, unless you need to update Windows or the Docker engine. From now on you'll use the Docker CLI on the dev box to manage containers running remotely on the VM, but you need those client certs. How you get them out will depend on your setup - I use a network share.

You can make a network directory share on your dev machine, or use the Samba server you have running in a Docker container on the Linux server in your garage. You can browse to the network directory in PowerShell on the VM and copy the client certs there. Assuming your share is on 192.168.1.50:

Now you can copy the certs onto your client machine, and then you can securely manage Docker on the VM.

If you snapshot the VM now and clone it, any clones will have the same TLS certs. That's not a good idea - every engine should have dedicated server certs, and Docker lets you specify which client certs to use for the engine you connect to.

Configure the Docker Client to Connect to the VM

Docker uses environment variables to point the client to a remote engine, which is how to use the local client to manage Docker on the VM. If you're likely to work with multiple remote engines, you'll want a script to set up each environment.

Run it with . ./script.sh to import the environment variables, and run unset ${!DOCKER_*} to remove all the variables.

And the unset equivalent is Get-ChildItem Env:DOCKER_* | Remove-Item.

Test your connection with docker version, and you'll see the engine is running on Windows x64. In my case the host running the VM is a Mac, so the client architecture is Darwin:

If you have a Windows client, you'll see an error message with every docker command, Unable to use system certificate pool: crypto/x509: system root pool is not available on Windows. That's because we're using certs on disk rather than Windows' certificate store, and you can ignore the warning.

Now you have a nice lightweight VM to run your Windows containers, and all the source files stay on your dev box. docker build sends the local directory to the remote engine as the build context, and docker-compose uses the local compose file. All that gets stored on the VM are Docker images and volumes.

You shouldn't need to access the VM for anything on a day-to-day basis, and remember that the VM is disposable - it has nothing installed except Docker, so you can replicate the state in a new VM just by pulling the same images.

For images you use all the time, list them all as services in a Docker Compose file and run docker-compose pull to download them in one hit.

Core edition will happily run with 4GB of RAM, and the minimal runtime means it starts and stops quickly. CPU and disk requirements are much smaller than the full Server edition, so you can have multiple VMs running concurrently. They could be in swarm mode when Windows Server 2016 supports overlay networking - or you could have one VM running as a standalone Docker engine, and another running as a single-node swarm. Switching between engines just means running the script to set your Docker environment variables.

If your VM platform supports it, you can run the Windows VM(s) in headless mode as you don't need to connect to them directly. If you do need access to Windows then connecting to the VM is much easier than PowerShell remoting, so don't forget your admin password. And when you're done the command to exit your session is logoff.