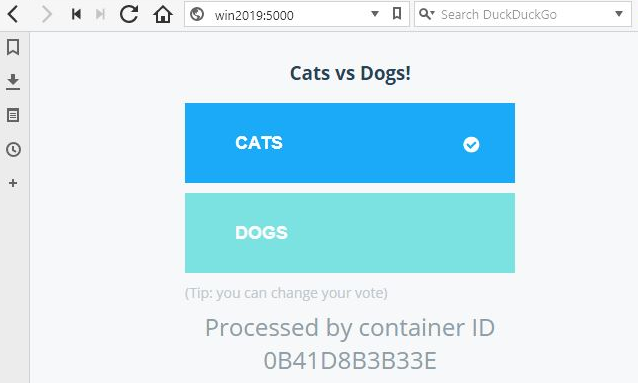 UPDATE: the second edition of my book Docker on Windows is out now. It focuses entirely on Windows Server 2019

Here are the main new features. All the Docker images in the snippets are from my dockerfiles-windows repo on GitHub, and they're all published to my sixeyed org on Docker Hub so you can follow along.

1. Published ports are accessible on localhost

Windows containers let you publish ports in the usual way, so when network traffic comes into your machine on a specific port, Docker directs it to the container to handle. But on Windows Server 2016 you can only access the port externally, not using using localhost on the machine.

Docker Desktop on Windows 10 has had a fix for this for a while, so you can use localhost on the desktop, but the network stuff is happening in Docker Desktop not in the OS layer.

Now in Windows Server 2019, the networking stack in the OS has been updated to support loopback. So you can do this:

That's very handy if you develop in a VM, or if you're using Docker in your CI process. On Windows Server 2016 you had to get the container's IP address to access it from the host, but now you can use the published port directly from localhost.

2. The Docker API is available through named pipes

There are lots of scenarios where you want to run software in a container which has access to the Docker API on the host where its running. CI is a great example - if you use multi-stage builds for your apps then you can compile from source inside containers, and you have no need to set up a CI server with a whole bunch of tools.

Instead you can run Jenkins in a container, and use docker or docker-compose commands for your build. In your build steps, you just run the same Docker commands you run on the desktop.

But in Windows Server 2016 you had to access the Docker API over TCP/IP, meaning you had to expose the Docker API and secure it with TLS certificates (probably using Stefan Scherer's instructions). Then you'd parameterise your build commands so you can pass in the Docker API configuration:

And in the build job, you set up the configuration for the Docker API in the $dockerConfig variable - complete with certs stored as secret files in Jenkins - before calling the build script:

It's a bit ugly and it means you need to know the IP address or hostname of the machine where the container is running. Which gets a lot harder when you're running in Swarm mode.

This lets you use normal docker and docker-compose commands with no additional configuration, because the Docker CLI inside the container can reach the host API from the named pipe. Your Jenkins job steps are much simpler: 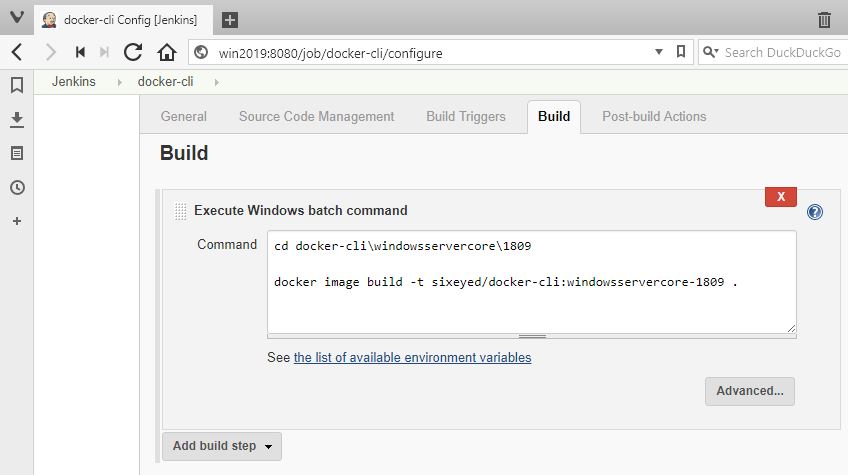 You no longer need to expose your Docker API over TCP/IP, which means you don't need to create, apply and cycle TLS certs, and your client inside the container doesn't need to know the details of the host where it's running.

Docker Swarm mode is a very simple but hugely powerful container orchestrator - you join together multiple servers running Docker into a single swarm, and then you manage your workload by deploying stacks to the swarm.

You also get load balancing for incoming traffic across your containers using Docker's ingress network routing mesh. This lets you do two very useful things:

The ingress network means traffic can come into any node of the swarm, and Docker will route it to a listening container. If there are zero replicas running on the node that received the request, it gets silently redirected to another node where the are containers running. If there are multiple replicas, Docker takes care of load-balancing.

It's a great feature, but it wasn't supported for Windows containers in Server 2016. You had to use host-mode publishing, which means you can only run one container per server if you want to have public accessible ports. (In practice people run Windows workloads as global services, or front-end them with a reverse proxy running on Linux containers in a hybrid swarm).

Now Windows Server 2019 supports Docker's ingress mode, so you can run your containers with the service level you need, and scale up or down knowing Docker will keep directing and load-balancing the traffic.

You can see this by switching to swarm mode and running multiple replicas of my simple .NET Core whoami service:

You'll see output like this, telling you that all the replicas are running:

In swarm mode you can't use localhost to access the published port. You need to send traffic externally to have it reach the ingress network.

On a different machine, you can make client requests to the swarm, and see responses from different containers - even though they're all running on a single server:

A second enhancement for Docker Swarm mode. Swarm provides service discovery via DNS, so containers can refer to each other by the service name and Docker resolves that to a container IP address. It's a very simple way to connect services, using existing technology so it's transparent to apps that they're running in containers.

There are two modes for service discovery: VIP and DNSRR. VIP uses a virtual IP address - when a container makes a DNS query, it gets a single IP address in the response which is a virtual address. The networking layer actually routes it one of the containers running service replicas. DNSRR is DNS round-robin - the DNS response contains a list of all the container IP address, in a random order to provide load-balancing.

VIP is the better option because it doesn't cause any issues for clients which cache DNS responses (which is almost every DNS client). If containers are replaced in the service, the virtual IP address stays the same, and client requests will always get routed to an active container. DNSRR can cause issues if clients cache the response, because the response is a single container's IP address, and when that container gets replaced the client can't reach the service - until the DNS caches expires and it gets a new response.

There are good uses for DNSRR, especially for clustered technologies which use DNS to discover other nodes in the cluster. Managing Load Balancing and Scale in Docker Swarm Mode Clusters covers this too.

Windows Server 2016 only supported DNSRR service discovery, but 2019 supports VIP too. Together with ingress networking, it means you can run highly available, highly scalable and resilient services in swarm mode.

I've added 1809 variants to the legendary Docker example voting app. You can run the app on a Windows 1809 swarm with this Docker stack file which uses ingress networking and VIP service discovery:

Now you can browse to the voting app on port 5000 on any node in the swarm, and one of the four voting app containers will process the request: 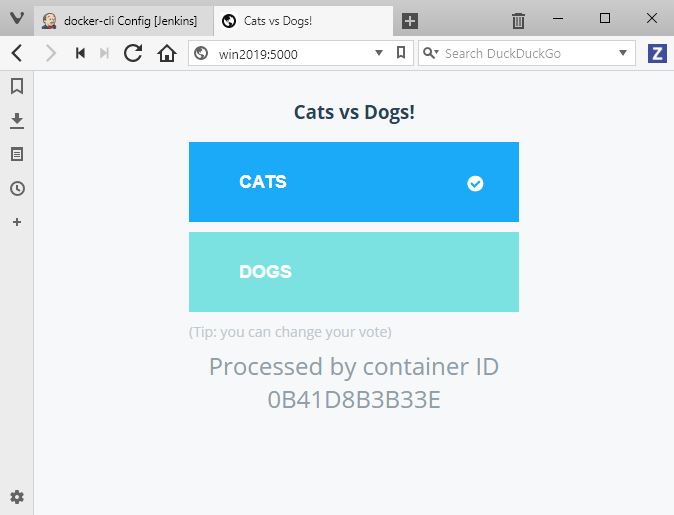 Make your choice and the app posts a message to the CNCF-incubating NATS message queue running in a container, then one of the three message handler containers will process the message and store the data in the MySQL-compatible TiDB database - running in a container. Browse to port 5001 and you'll see the totals from the vote result app.

Docker volumes are how you separate storage from the lifecycle of your containers. You attach a volume to a container, and it surfaces as a directory in the container's filesystem. Your app writes to C:\jenkins (or whatever path you mount) and the data actually gets stored in the volume, which could be storage on the Docker host - like a RAID array on the server - or a separate storage unit in the datacenter, or a cloud storage service.

The mount inside the container should be transparent to the app, but actually in Windows Server 2016 the implementation used symlink directories, and that caused a few problems.

I wrote about the workaround for this - using a separate G:\ drive mount

Here's the basic problem - start by running an interactive Windows Server Core 2016 container, with a Docker volume mounting a local directory to the target C:\mount inside the container:

Check the directory listing in the container, and you'll see C:\mount is actually of type SYMLINKD, and it maps to a crazy file path starting [\\?\ContainerMappedDirectories:

This causes problems with apps where the underlying language tries to resolve the symlink and use the target path, because they get the double-backslash and the question mark and they're not happy. The G:\ workaround is simple but hacky.

It's no longer a problem in Windows Server 2019. Run the same command on an 1809 machine running Docker:

And now the listing shows C:\mount as a standard directory:

Windows Server 2016 had a couple of other volume quirks. One was that you couldn't use a target directory for a volume mount if that directory already existed from the Docker image.

That's problematic for a lot of apps where there's a config directory which is shipped with a default configuration file in the image. On Linux you can run the container and overwrite the config directory with the contents of your volume. On Windows 2016 you can't do that, so you'd have to write a Dockerfile which packaged your custom config.

Or with web servers, if you want to use the default image but provide your own content from the volume - you'd get an error from Windows Server 2016:

The error message you get - The directory is not empty - also falls into the "it's true, but it's not really helpful" category.

This limitation is gone in Windows Server 2019. Now you can mount a volume over an existing directory and the contents get replaced, so the container sees the contents of the volume and not the contents from the image:

No errors. And now when I browse to the app, I see my web page instead of the default Nginx page:

One quirk remains. You still can't mount a single file as a volume, you'll get invalid mount config for type "bind": source path must be a directory

Sounds like the book Docker on Windows needs updating

That'll be the five-star rated book Docker on Windows - available now on Amazon :)

Yes, the first edition was written for Windows Server 2016. I'm working on updating it now. The second edition will cover all the new features and more, as well as updating all the demos and code snippets to run on Windows 1809. Stay tuned...