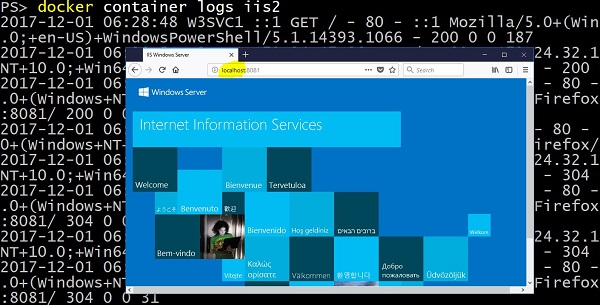 Each week I'll look at one Dockerfile in detail, showing you what it does and how it works. This is #13 in the series, where I'll cover configuring IIS websites so you can read the W3C log entries through Docker.

The Docker platform has some opinions about how applications should run, but it doesn't force them on you. An app which is a good citizen in the Docker world will:

That's about it. Running in the foreground lets Docker monitor the process to check the application is still running. Using environment variables or files for config lets Docker inject configuration settings when it starts containers. And using the standard output streams for logging means your application logs get surfaced to Docker - so you can see them with docker container logs, and you can route them to different places using a logging driver.

It's easy to adopt those idioms with a custom .NET console app, but it's harder with a third-party app that runs in a background Windows Service - like IIS. You can still run those apps just fine in Docker, but you need to do some extra work to integrate them with the Docker platform.

Microsoft have addressed the first two concerns with ServiceMonitor, and in this post I'll show you how to configure IIS logging in your Windows containers.

Microsoft use Service Monitor as the entrypoint to the IIS, ASP.NET and WCF Docker images. The Dockerfile for IIS has this ENTRYPOINT:

Service Monitor also elevates environment variables, so if you run a container with --env options, the values you set get exposed to the IIS processes and you can read them from your web apps. This is a new addition to Service Monitor which I've yet to verify. In my Dockerfiles you'll see a bootstrap script which explicitly copies process-level environment variables to machine-level. I'll check this out when it comes to next week's Dockerfile.

Service Monitor doesn't do anything about logging, because it's a generic tool and different services have their own ideas about logging.

IIS writes log entries to disk, splitting them across multiple files by web application, worker process and date. You can configure how and where the log files get written, and that's what this week's Dockerfile is all about.

The idea is simple - configure IIS so it writes every log entry to a single file. Then in the startup command for the container, run a script which watches and writes out lines from that file. The script becomes the process that Docker monitors, so all the log entries from IIS get relayed into Docker's logging system.

This option is not perfect. It means storing log files in the container and copying data back out to Docker. And it means bypassing Service Monitor, because the startup script needs to tail the log file. But it's a good way to get started and explore options for bringing older apps to Docker without a rewrite.

Now if you browse to that container, and hit refresh a few times, IIS will start writing log entries.

If you're using a recent release of Docker for Windows (17.11.0-ce-rc2-win37 or higher) you can now browse to http://localhost - you no longer need to get the container's IP address. Woot :)

Check the logs for the container, and you'll see none:

You can see the log entries in the container's filesystem, but first you need to find the log file name, because it's timestamped:

My log file is called u_ex171201.log and I can read it by executing another container command:

The log entries are there on disk, but in a variable file location, so you need to make the path static before you can set Docker to watch it.

The Dockerfile for IIS logging is pretty simple. It starts from the base IIS image, and then runs some PowerShell commands to configure how IIS writes log entries:

This is ugly, but fairly straightforward. The Set-WebConfigurationProperty cmdlet is used for setting up IIS, and altogether that script sets up logging such that:

And the rest of the Dockerfile sets the startup command:

This replaces the use of Service Monitor, so the PowerShell session that runs the script becomes the process which Docker monitors. That process does four things:

This is a naive implementation. For production you should combine the log file tailing with a periodic check that the service is still running. You could combine this script with the Wait-Service.ps1 script which checks on Windows Services.

As always, you can clone the source code and build your own image:

Or skip that and use the image on the dockeronwindows org on Docker Hub:

Run a container from the image to start IIS:

Now browse to the container IP address (or localhost) and F5 a few times. When you check the container logs now, you'll see the IIS log entries:

This is useful if you're running static sites but don't get too hung up on the fact that this is IIS. The key point to take away is that you can bring an old app that has its own ideas about reliable running and logging, and bring it into Docker without having to change it.

Next week I'll look at using environment variables for configuration settings, and promoting them to machine-level so apps running in IIS can see them.