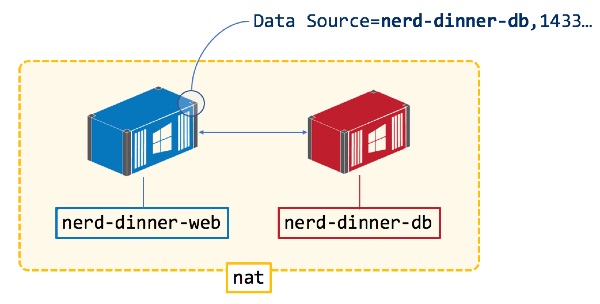 Each week I'll look at one Dockerfile in detail, showing you what it does and how it works. This is #17 in the series, where I'll look at connecting to a database container from a web application container.

This is the easy part. Docker has service discovery built in, using a DNS server which is hosted in the Docker platform. When you run a single-node Docker server, containers can reach other containers in the same Docker network by using the container name as the target hostname.

On Windows there's a default Docker network called nat which all containers are connected to. You can start a container called c1 and reach it from any other container by using c1 as the remote hostname: 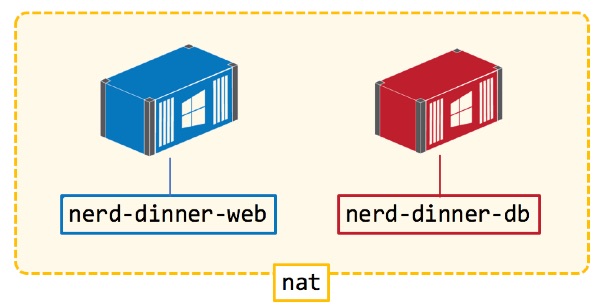 Docker's DNS resolution falls back to the DNS server on the host, if you request a hostname which isn't a container. That means you can connect containers to external services which aren't running in containers, just by using the external server's hostname.

DNS makes it easy to connect containers, and it works in the same way with a cluster of Docker servers in swarm mode - you just use the service name as the target hostname. The other part of the connection string is the database user credentials - and there are a few options for configuring that.

.NET has an XML-based configuration system. It works well but it's limited - where config settings change between environments, you need to package whole new XML files in the deployment for each environment. And you can only use XML with the system configuration framework - if you want to read settings from different types of sources, you need custom code.

Docker has its own idioms around configuration. You can package your app's default configuration settings in the Docker image, and then override values when you run a container from the image.

There are three ways to do that:

Check out the Docker config lab and Docker secrets lab on Play with Docker to try out those options.

The great thing about Docker's approach to config and secrets is that it's platform-independent - your app just reads files and environment variables, there's no custom Docker client library to use. You can even structure your image to use Docker's configuration options without changing application cosde.

This week's Dockerfile does that. It returns to Nerd Dinner, setting up configuration in the application image so the website container can connect to the SQL Server database container from Windows Weekly Dockerfile #16.

I'm starting with the easiest implementation - the Dockerfile for dockeronwindows/ch03-nerd-dinner-web uses an environment variables for configuring the SQL Server account password:

That default matches the password configured in the database Docker image, so this is set up for development use - where devs will run the database and web containers with default settings, and it will all just work.

In the Web.config file for the app, the connection string for SQL Server is captured with a placeholder:

There's no default value in the config file which is deliberate - I'm expecting devs to run the app using Docker, if they run direct from Visual Studio the app will fail because the config is not correct.

The startup command in the Dockerfile uses a bootstrap script which reads the SA password from the environment variable, and updates the config file:

So here I read the environment variable sa_password and use the value to build a full database connection string, which I then inject into the config file, overwriting the placeholder. If you run a container from this image without specifying any environment values, it will use the default value from the Dockerfile.

Browse to the web container (or port 8081 on localhost if you're running the latest version of Docker for Windows), and you can click the Register button and register an account: 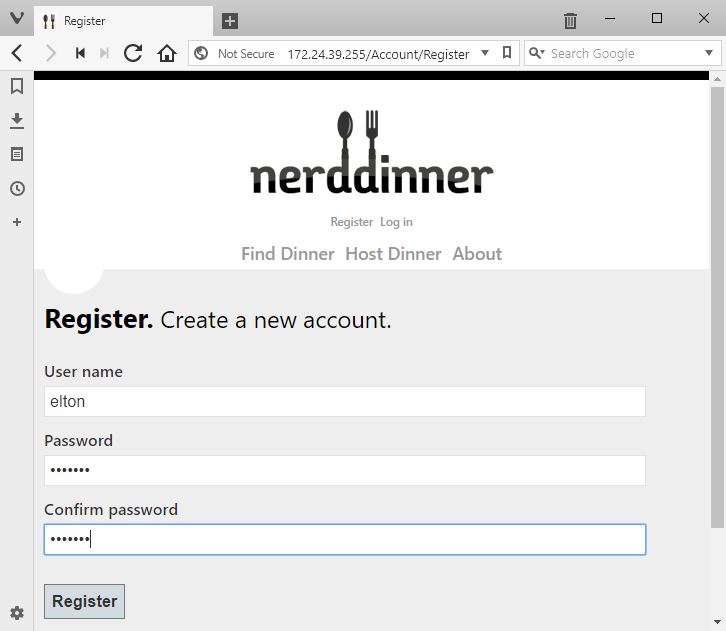 Then you can connect to the database container using a SQL client and query the UserProfile table - you'll see the new user in there: 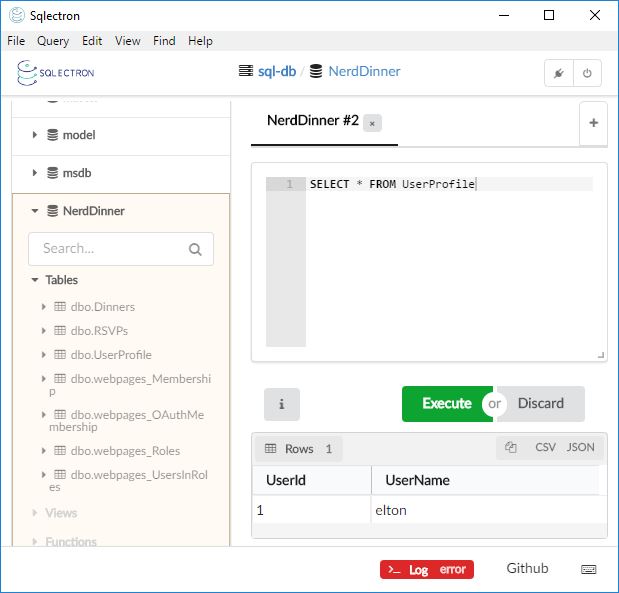 You can use the exact same images with a custom database password, which would suit a shared test environment. You can pass a new setting with --environment "sa_password=N3wV4lue", but you need to make sure it matches both containers.

An easier way is to capture the setting in a text file like this:

Then you can create containers and use the env-file option, which loads environment variables from a file and (in this case) makes sure the Nerd Dinner containers are using the same credentials:

The behaviour is the same, but now the SQL Server SA account is using a custom password, read from the environment file, and the web app is using the same file to read the password for the connection string.

You can use environment files in Docker Compose for multi-container apps like this - check out the v1 compose file from my Docker Windows workshop.

For confidential settings like database connection strings, a better option is to use Docker secrets - which I do in this Dockerfile from my modernizing .NET apps YouTube series.

In the rest of Chapter 3, I look at breaking up monolithic applications - starting with the Nerd Dinner homepage.

Next week's Dockerfile is ch03-nerd-dinner-homepage, which is an ASP.NET Core replacement for the Nerd Dinner homepage, also running in a container.