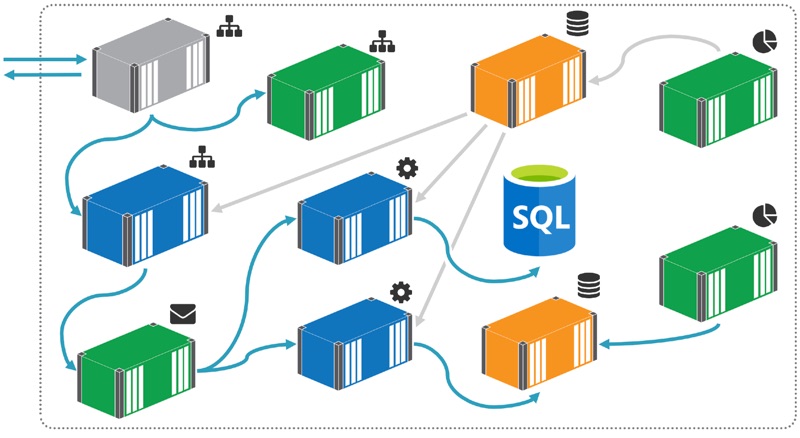 My latest Pluralsight course is out now! It's a Docker course for .NET developers and architects who want to modernize existing applications, and run them in containers for portability, security and efficiency.

You don't need any Docker knowledge to get going with this course, and if you already have Docker experience, you'll learn how to take your apps to production.

This course is all about running older applications in Windows containers, and using the Docker platform to modernize them without doing a full re-write. I take an ASP.NET WebForms application and evolve it through several phases using Docker:

The final application runs across multiple containers, with features split into small, independent units, using third-party components - running in containers - to plug them together.

At the start of the course the demo app is a monolith which needs SQL Server, IIS and .NET installed to run.

By the end of the course, it's a distributed application which scales easily and is self-healing, has integrated monitoring, uses secrets for configuration management, and runs across many custom and open-source components.

The only prerequisite to run the whole solution is Docker, and when you run in development you'll be using the exact same platform that you use in production.

What's in the Course?

The course runs across seven modules, starting with the basics of Docker and Windows containers, modernizing the application architecture, and going through to production deployment on Azure.

The core web application stays as an ASP.NET WebForms app throughout the course. Some features are pulled out into separate containers, running as .NET Console apps. Other features are provided by using open-source, third-party components:

The course is all about Docker containers on Windows - the parts of the app all run in Windows, there's no Linux containers. Just like my book, Docker on Windows :).

I've aimed at covering the major workflow for moving .NET apps to Docker - from running in containers with no code changes, through modernizing the architecture and delivery, to deploying to production in the cloud.

Hope you find it useful.