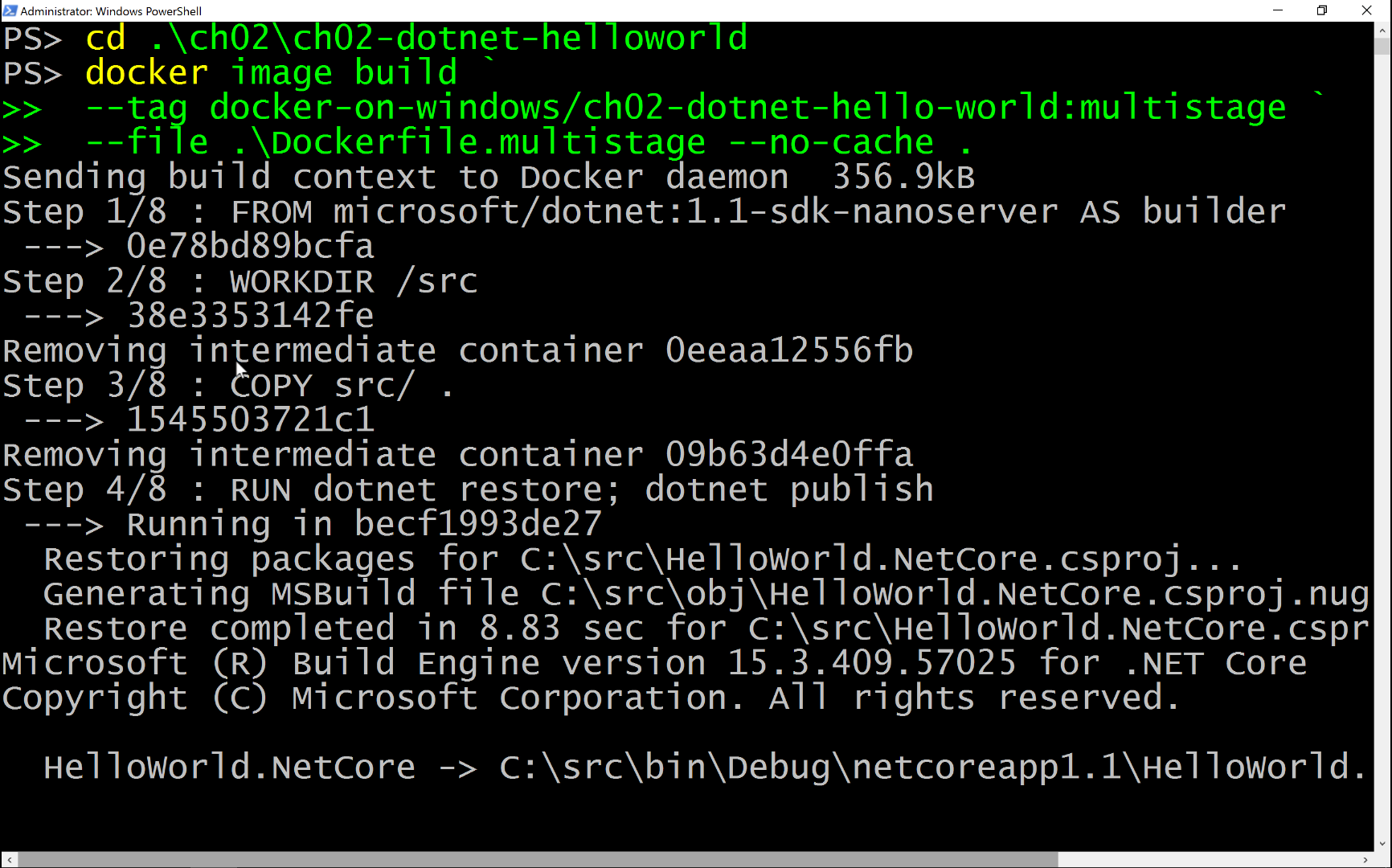 Each week I'll look at one Dockerfile in detail, showing you what it does and how it works. This is #6 in the series.

Multi-stage builds use a Dockerfile with multiple FROM instructions. Each FROM starts a new stage in the build process. Intermediate stages are only used during the build, and it's the final stage that packages the application image.

Multi-stage builds make your app truly portable. You compile the app in one stage of the build, and package the compiled output in the final stage.

With Docker multi-stage builds, anyone can build and run your app from source with just one dependency: Docker.

The compile stage of the build uses a Docker image which has the toolchain installed. The app is compiled in a container, so developers use the exact same build tools as the CI process. The CI servers don't need any tools installed except Docker.

Stage 1 is the build process. It starts from the microsoft/dotnet image, using the variant built on Nano Server, with the .NET Core 1.1 SDK installed:

It's better to break out the restore and build steps, to make use of Docker's image cache and speed up your build process - but I'll cover that later in the series.

At the end of this stage, the published app binaries are available in the builder at a known location.

Stage 2 packages the app. It uses the slimmed-down microsoft/dotnet image with the 1.1 runtime installed, but not the SDK. There's nothing new here except:

Like the original example you don't need .NET Core installed to build and run this app. The toolchain is all in the SDK image used in the first stage of the build, so you can just clone the sixeyed/docker-on-windows repo, and run:

You'll see all the output from NuGet and MSBuild running inside the build container:

Now the app is packaged in a Docker image, but like the slim example, the app image uses a slimmer base image, with just the bare minimum needed to run the published app.

The output is a Docker image like any other, the build stages are discarded and they're not part of the final image. You can push and pull the image to Docker registries and run containers from it in the usual way:

Multi-stage builds bring a whole lot of benefits to your project:

You can do interesting things with multi-stage builds, it's not just about compiling the app. If you have specific dependencies for your build process or your app, you can use multiple stages with other Docker images as the source for dependencies.

Later in the book I package Jenkins to run in a Docker container on Windows. The Dockerfile starts like this:

Chapter 2 explores the Dockerfile syntax and the image building process. Next week it's dockeronwindows/ch02-static-website, a simple website which demonstrates how Docker uses temporary containers during the build.