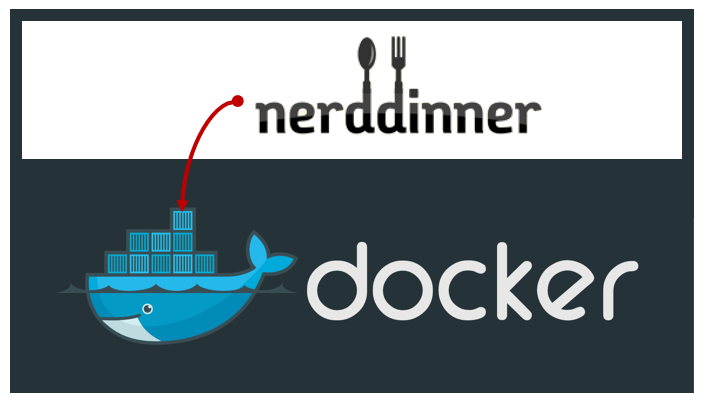 FROM microsoft/iis - a single line of code which has the potential to change the way you build, ship, run, test, support and even design ASP.NET applications.

It's how you start to package "legacy" ASP.NET apps in Docker images, so you can run them in containers on Windows 10 and Windows Server 2016. Once you've packaged your app into a container image you have:

Even if you don't have a roadmap to microservices, DevOps or the cloud, Dockerizing your existing apps still has the potential to give you a huge return on a small investment. Packaging apps as images can eliminate deployment problems between environments, because every environment runs the exact same thing. Running applications in containers lets you condense many more apps on your servers, making the most of your compute resources while keeping your apps isolated.

And with Docker you can join multiple machines into a managed cluster, called a Docker Swarm. Then Docker manages where your apps run, and if a server which is running some containers goes down, Docker will start new instances of those containers on another host.

There's plenty more functionality in Docker which all helps make your delivery faster and more reliable, and reduces your support overhead. It's a great technology which is all the more powerful because it's not just for greenfield apps which start with a blank-page architecture. This is the first post in a series which will look at Dockerizing an existing - actually, a pretty old - ASP.NET Web app.

Nerd Dinner was a showcase app used to demonstrate what you could do with ASP.NET MVC. It went through a few iterations on CodePlex, finishing up with an ASP.NET MVC 4 version with the last commit to the master branch on 6th May 2013.

Dockerize. Transitive verb. To package your application into an image and run it in a container. Thereby making it awesome.

First things first, I've cloned the source and put it on GitHub: sixeyed/nerd-dinner. The master branch is a cut of the last CodePlex commit, with the solution upgraded for VS2015. No other changes, so if you git clone https://github.com/sixeyed/nerd-dinner.git you get fundamentally the same code as the current production release.

In this first post we're not going to change the code at all, just package and run it using Docker. The dockerize-part1 branch has no code changes, it just adds the Docker setup to build the image. In the rest of the series we'll see how we can change it to make more use of the Docker platform to modernize the app.

I'll be using Windows Server 2016 Core for my Docker host, having followed my own instructions to get Docker on a Windows VM. Server 2016 has an Evaluation release, which will have an upgrade path to RTM, so the time you spend building the environment now won't be wasted.

We'll write a Dockerfile and add all the steps to package our application, so we can build it into a self-contained image for running Nerd Dinner.

Docker images start from a known base image, and from that you layer on your changes to end up with a final image that contains your app, your app's dependencies, the application platform, it's dependencies, and the underlying operating system. To run full ASP.NET apps (and any .NET Framework app), we need to start with the microsoft/windowsservercore image. That image is a flavour of Windows Server Core, so you can run PowerShell scripts to add any Windows features you need.

For Nerd Dinner, we know we'll need IIS set up, and Microsoft have another image on the Hub - microsoft/iis - which is built from microsoft/windowsservercore and adds IIS, so we can use that as our base image and save the work to install IIS. Here's how the Dockerfile for Nerd Dinner starts:

I won't delve into the Dockerfile syntax here, but that should be fairly clear:

(If you're curious about the escape line, that's to do with Windows, Dockerfiles and the Backtick Backslash Backlash).

Nerd Dinner uses SQL Server 2012 LocalDB (I told you it was old). That installs with an MSI which luckily you can still download. It's a common pattern in Dockerfiles to download a dependency from the web, and save it into the image so it can be installed. We can do the download with another cmdlet:

This particular MSI has some quirks with unattended installation on Windows Server Core; we can do what we need to in the Dockerfile, but we have to be very careful with the syntax when we invoke msiexec. I'm using the standard cmd shell here; I advise you not to tamper with this line:

Then back to PowerShell to start LocalDB running:

Ordinarily a production ASP.NET app would have its own app pool, so it runs in its own process and gets some isolation from anything else running on the box. But this is an image for an application container - the Nerd Dinner app will be the only thing running on it, so we already have isolation at a higher level, and inside the container we can use the default .NET app pool.

We can chain together multiple PowerShell commands for the website setup, removing the default site, creating directories for Nerd Dinner and creating the new website:

In many cases, that would be all the setup you need to do - but Nerd Dinner is old and real, and it has some wonky stuff to deal with. Firstly, we need to change some App Pool settings to let IIS use LocalDB:

Then in the Web.config there are some custom settings for the system.webServer/handlers section. By default that section's locked down in IIS, so we need to run appcmd to unlock it:

That's the pre-requisites done, so now we need to put the Nerd Dinner application into the image.

There are two ways to package an application into a Docker image.

Option 1 - build the app as you package it

In this case, you use a base image which contains the development platform as well as the runtime, so in your Docker build you bring in the source code for your app and compile it as one step in building the container image. The plus side of this is you don't need the dev platform on your host machine, so any machine running Docker can build the app - it's what powers automated builds on Docker Hub, without Docker having to install Go, .NET Core etc. on their servers.

The downside is a much bigger image, with all the dev tools installed along with your app - unless you carefully clean them up towards the end of the image build.

Option 2 - build the app, then package it

This way you compile the app on your dev machine (or build server) and then copy the compiled application into the Docker image. You end up with a smaller, more focused image. That's what I'll be doing with Nerd Dinner.

In Visual Studio the Web project has a default target so when you publish it you get the app built to c:\nerd-dinner. Let's assume we have a build script which publishes the app and copies the published folder to the same location as the Dockerfile. We know the folder will be there, so we can copy it into a known location in the image:

When Docker runs this line, it will copy the published application folder into the image, which is where we've already configured the web site to serve its content. Now everything is ready.

Usually you need a CMD or ENTRYPOINT instruction at the end of your Dockerfile to tell Docker the process to run when containers start. The IIS base image already sets this up, so we don't need to do it here.

Here's the Nerd Dinner Dockerfile in full. With comments it comes in at 35 lines:

We build it into an image with the docker build command. From the location of the dockerfile and the compiled nerd-dinner folder, just run this command to build and name the image:

We want to run Nerd Dinner in a background container, publishing the container port 8081 to the host's port 80. I've pushed my image to the Docker Hub so you can run this command on any Windows 10 or Server 2016 machine with Docker installed, and run Nerd Dinner without having to build your own image:

The second line tells you the IP address of the container, so you can browse to that and see the app in all its glory: